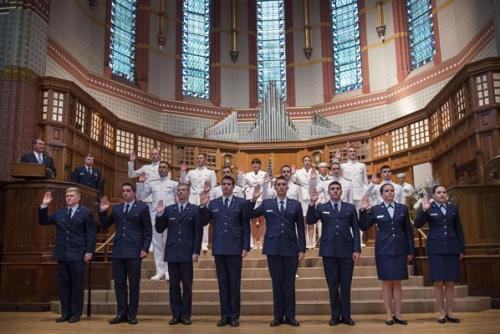 WASHINGTON, May 24, 2016 — Defense Secretary Ash Carter returned to his alma mater yesterday to commission the first graduates of Yale University’s ROTC program since the Vietnam Era.

In a ceremony on campus in New Haven, Connecticut, Carter commended the 18 men and women – 10 new Navy ensigns and eight new Air Force second lieutenants – for their decision to serve, saying they embraced the “awesome responsibility of leadership.”

Carter described the ceremony as a “very important homecoming of sorts for the nation.”

The Air Force and Navy ROTC programs left Yale amid protests over the Vietnam War more than 40 years ago. Yale welcomed students back into the program in 2012.

The incoming officers helped “bridge a divide that has persisted for too long,” Carter said, noting that they served as role models to their classmates, some of whom had never met members of the military before.

“People think differently about the world when a former roommate is managing the nuclear reactor on a submarine, or a former organic chemistry classmate is serving as a combat medic, or a fellow programmer is defending our nation’s cybersecurity,” Carter said.

The defense secretary stressed the importance of their chosen profession and the gravity of their future missions in defense of the nation and the world.

“It’s been said that security is like oxygen,” he said. “When you have it, you don’t think about it. But when you don’t have it, it’s all you can think about.”

He outlined the five global challenges facing the United States: Russian aggression, historic change in the Asia-Pacific region, North Korean nuclear provocations, Iranian aggression, and defeating terrorism and the Islamic State of Iraq and the Levant.

Military service will likely take the young officers all around the globe, he said. Their individual actions will be a “clear reflection of our values and our leadership in the world.”

That holds true, he said, whether they are working with coalition partners over the skies of Syria or Iraq, conducting exercises with U.S. allies in the waters of the Pacific, or responding to a disaster in a far corner of the globe.

“As you step forward into a complex and changing world, our nation is counting on your constant professionalism, on your pursuit of innovation, and most of all, on your principled leadership,” he said.

Carter earned his bachelor’s degrees in physics and in medieval history at Yale University.

Fourteen of the newly commissioned officers were Yale students, while four were from other schools but trained at Yale. 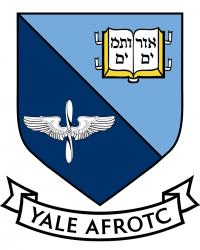