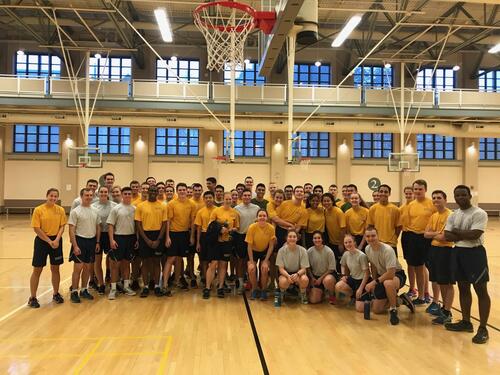 On February 7, 2020, the Yale Midshipmen invited the cadets of Det 009 to participate in a joint Physical Training (PT) session at the Lanman Center. Hosted annually, this event is a great opportunity for the cadets and midshipmen to get to know each other and engage in friendly competition.

The event began with opening remarks from Captain Grasdock, the former commander of Yale Navy ROTC. He provided some words of encouragement, thanked everyone for attending, and announced the teams for the day. In the past, teams were organized by service, with Navy midshipmen competing directly against Air Force cadets. However, the Navy added a new twist this year by placing both cadets and midshipmen on the same teams. Under the new organization, cadets and midshipmen were able to work together in order to achieve victory.

The basketball games helped the cadets and midshipmen bridge the gap between services and function as a single unit. Both services had skilled basketball players among their ranks which made for exciting games. The large number of participants also increased the intensity of the competition, and both cadets and midshipmen gave maximum effort. When the final whistle blew at the last game, everyone went to the storage unit to bring out a large rope for tug of war.

Enthusiasm was at a high after the basketball games which made tug of war the most entertaining event of the day. With only two teams able to compete at a time, the cadets and midshipmen who were not participating stood by and cheered on their friends as they did their best to pull the rope over the line. The final match settled the debate about which group was the strongest and provided a well deserved morale boost for the winning team. However, two events still remained to be completed.

The next event was an endurance competition where cadets and midshipmen held a plank (either on their elbows or palms) for as long as possible, up to ten minutes. Almost every competitor set a personal record, and several lasted the whole ten minutes. One senior Air Force cadet endured the plank by reciting a few poems, one of which being “Do not go gentle into that good night” by Dylan Thomas. The cadet persevered through the entire ten minutes, despite the pain from the plank and the ridicule from the midshipmen.

After completing the planks, the cadets and midshipmen transitioned into the final event of the day: relay races. During the relay races, each participant  would have to run one lap around the 200 meter track as fast as possible. With avid runners in both services, and lunch time quickly approaching, times were especially fast. The relay was a great mix of individual and team competition that culminated a fun day of hard work and fellowship for the Navy and Air Force detachments of Yale.

With some parting words from Captain Grasdock, cadets and midshipmen gathered their belongings and departed the Lanman Center for some well-deserved tacos courtesy of Trumbull’s dining hall. This year’s joint AF-Navy PT session was a resounding success, as cadets and midshipmen were able to further understand each other’s cultures while maintaining a spirit of friendly competition between the two services.

There’s little doubt that the midshipmen and cadets eagerly await next year’s session!

Det 009 would like to thank Navy ROTC for hosting the PT session; we look forward to returning the favor as soon as COVID-19 guidelines allow.