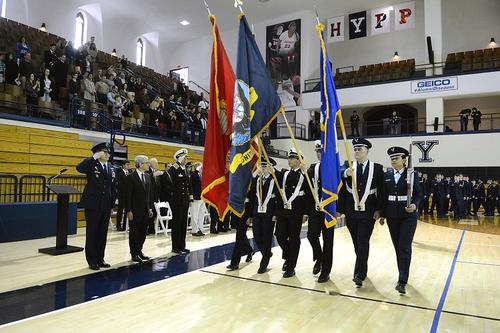 The annual pass in review will feature ROTC units from Yale showcasing the skills they’ve learned throughout the year before Yale President Peter Salovey and representatives from other colleges and universities that participate in Yale’s Air Force ROTC program.

Friends and family of the cadets and midshipmen and other members of the Yale community will also be present for the ceremony, which is free and open to the public.

Salovey will serve as the “reviewing officer” at the event, assuming the role of a commanding officer in a traditional military review to inspect officers in training. Colonel Thomas McCarthy, commander of Yale’s Air Force ROTC and adjunct professor of aerospace studies, and Captain Wayne Grasdock, commanding officer of the university’s Naval ROTC and an adjunct professor of naval science, will also be in attendance.

During the pass in review the graduating seniors are recognized for their accomplishments and their first military assignment location and job are announced. In addition, awards are presented to midshipmen and cadets in recognition of outstanding achievement during the past year.

“I am proud of all the ROTC students and their willingness to serve their country. Yale and other colleges and universities that comprise the students of ROTC, have storied service to our country. President’s Review is a brief, yet formal way of recognizing these students in a public manner with President Salovey presiding over the ceremony,” said McCarthy of the event.

“It is an honor to be part of an elite ROTC organization like this, one that has a long, rich history at Yale that dates back to the founding of the ROTC program in the U.S. in 1926,” said Grasdock. “Each year the students are able to showcase some of their many skills to a very supportive campus that is steeped in military history.”

ROTC midshipmen and cadets at Yale take leadership and other courses as part of their preparation for military service after graduation, and actively train on campus with a residential cadre of military personnel.