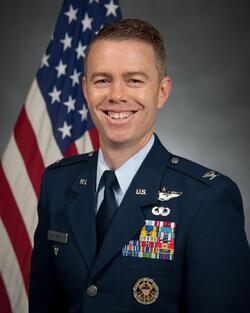 Colonel George R. Granholm is the Commander of the Reserve Officer Training Corps (ROTC) Detachment 009, Yale University, New Haven, Connecticut. Colonel Granholm is responsible for the education and training of ROTC cadets from Yale University and seven associated crosstown universities and colleges during their four-year officer education and training program. Col Granholm also serves as a member of the Yale faculty as the Professor (Adjunct) of Aerospace Studies.

A New York native, Colonel Granholm earned his commission in 1998 from the United States Air Force Academy, completing his degree in astronautical engineering as a Distinguished Graduate. He was selected as a Charles Stark Draper Fellow for graduate studies at the Massachusetts Institute of Technology. He has accumulated over 2700 flying hours in the C-21A and C-17A aircraft, including 166 combat and 43 combat support missions in support of a variety of operations. Colonel Granholm was selected for the Olmsted Scholar Program in Freiburg im Breisgau, Germany, attaining fluency in the German language and completing a Master of Arts in Political Science at the Albert Ludwig University of Freiburg. Colonel Granholm has commanded an operations support squadron and served on the Joint Staff as Executive Officer to the U.S. Military Representative, NATO Military Committee, Brussels, Belgium.  Prior to this assignment, Col Granholm served as Vice Commander of the 521st Air Mobility Operations Wing, Ramstein, Germany.